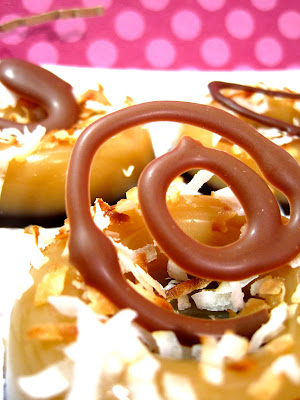 A few years ago, I bough a box of Samoas from some kids at the 8th street el station, here in Philadelphia. Now, I've made a few purchases on the El (what up egyptian musk and Meet the Parents bootleg) so I was not at all surprised when I got home and noticed that I had not bought a familiar box of Samoas, but I had bought "Caramel Delights". Had I been hustled by Girl Scout impostors?

Turns out they were legit- but I did spend the next week telling anyone who would listen (captive audiences) about how "Can You Believe They Changed The Name of Samoas to Caramel Delights Because There Was Outrage Over The Name Samoa Being Culturally Insensitive".  I totally fabricated the cultural insensitivity thing, but you try making a story about buying girl scout cookies interesting.

I'd be remiss not to mention that Vicky B. has a Samoa recipe in her book, but the one we made up on the fly is super different and not at all a copy.  For this one we used: caramel syrup, coconut cream, chocolate sauce, toasted coconut, chocolate chips and of course, rum and gelatin.